Friday 9 September 2022 - The Agoria Solar Team could start second in the Sasol Solar Challenge today. After a smooth start, the Belgians had a day full of bad luck. The chase vehicle of the solar car drove through a pot hole and got two flat tyres.  A few hours later, an uneven road surface caused the solar car to end up on two wheels. As a result, a lot of kilometres were lost today.

After a successful qualifier the day before yesterday, the Belgian Solar Team could start as second in the Sasol Solar Challenge, a competition for solar cars in South Africa. The students of the KU Leuven had a smooth start. Unfortunately, this was not an omen for how the rest of the day would go.

Due to two flat tyres in the chase vehicle of the solar car, the team had to change their chase vehicle very quickly. Part of the team stayed behind, along with some of the equipment.

Unfortunately, the bad luck did not stop for the students. When the solar car slowed down to take a turn, it started skidding due to an unexpected unevenness in the road. The solar car ended up on two wheels and scraped its side against the ground. After a short stop to check the car, it could continue. For safety reasons, the solar car continued driving at reduced speed, which meant that fewer kilometres were covered today than hoped.

We started very smoothly today, then everything went well. At one point, the chase vehicle got two flat tyres, so we had to leave behind part of the team and part of the equipment because we changed vehicles. That took quite some time, but then we were able to continue safely. During a very sharp bend, the solar car ended up on two wheels due to an unevenness in the road. We stopped immediately to check the car. Everything was ok. We then continued safely at reduced speed to arrive safely at the evening stop.

During the night, the car will be thoroughly checked and the necessary repairs will be made to ensure that the car can take the start tomorrow in top condition. In the coming week, the students will do everything they can to make up for the kilometres lost today. The team arrives in Cape Town on Friday 16 September with their solar car.

Tonight, the car will be thoroughly checked and we will have to make repairs where necessary. We are going to do everything we can in the coming days to make up for our lost kilometres and beat our opponents. 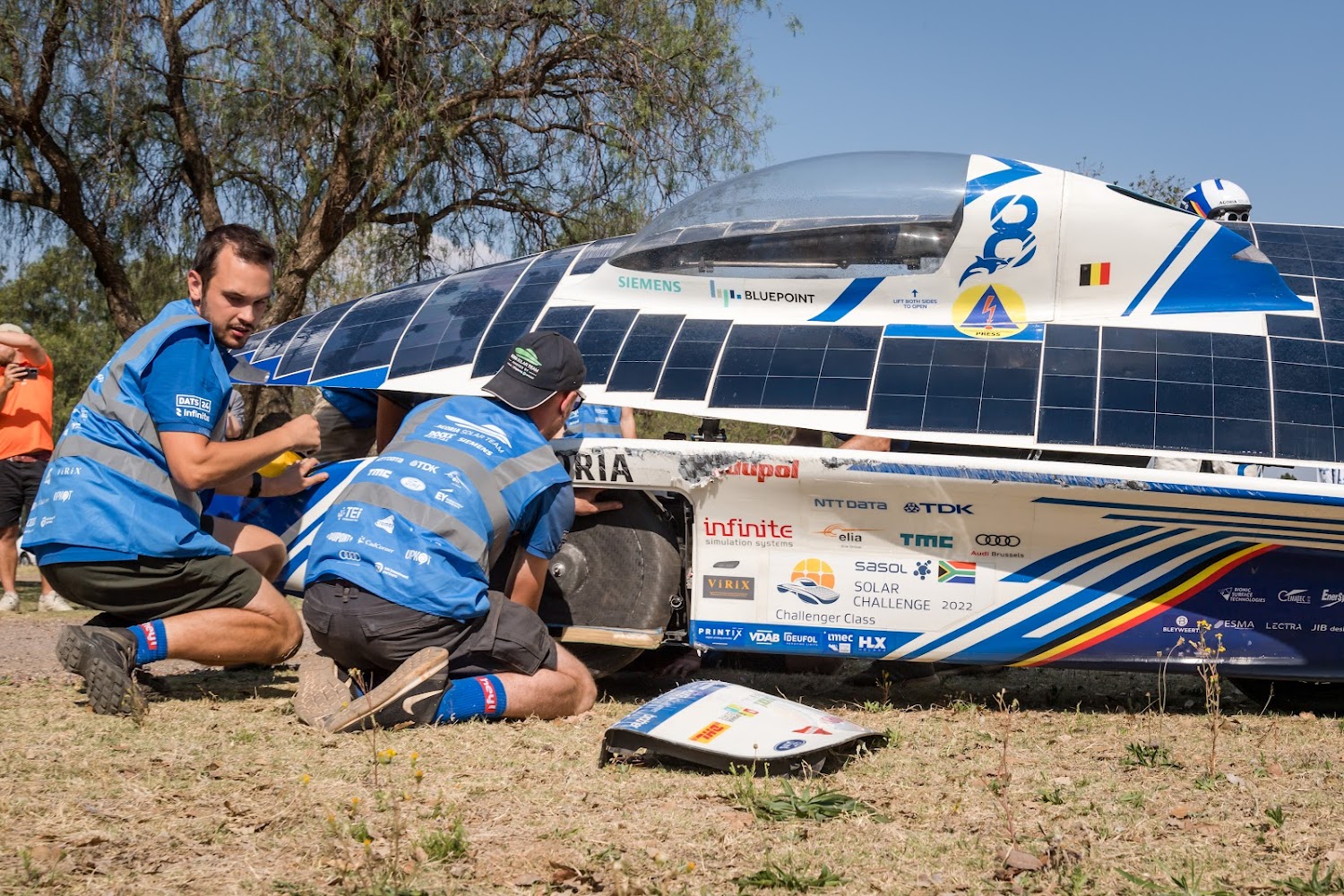 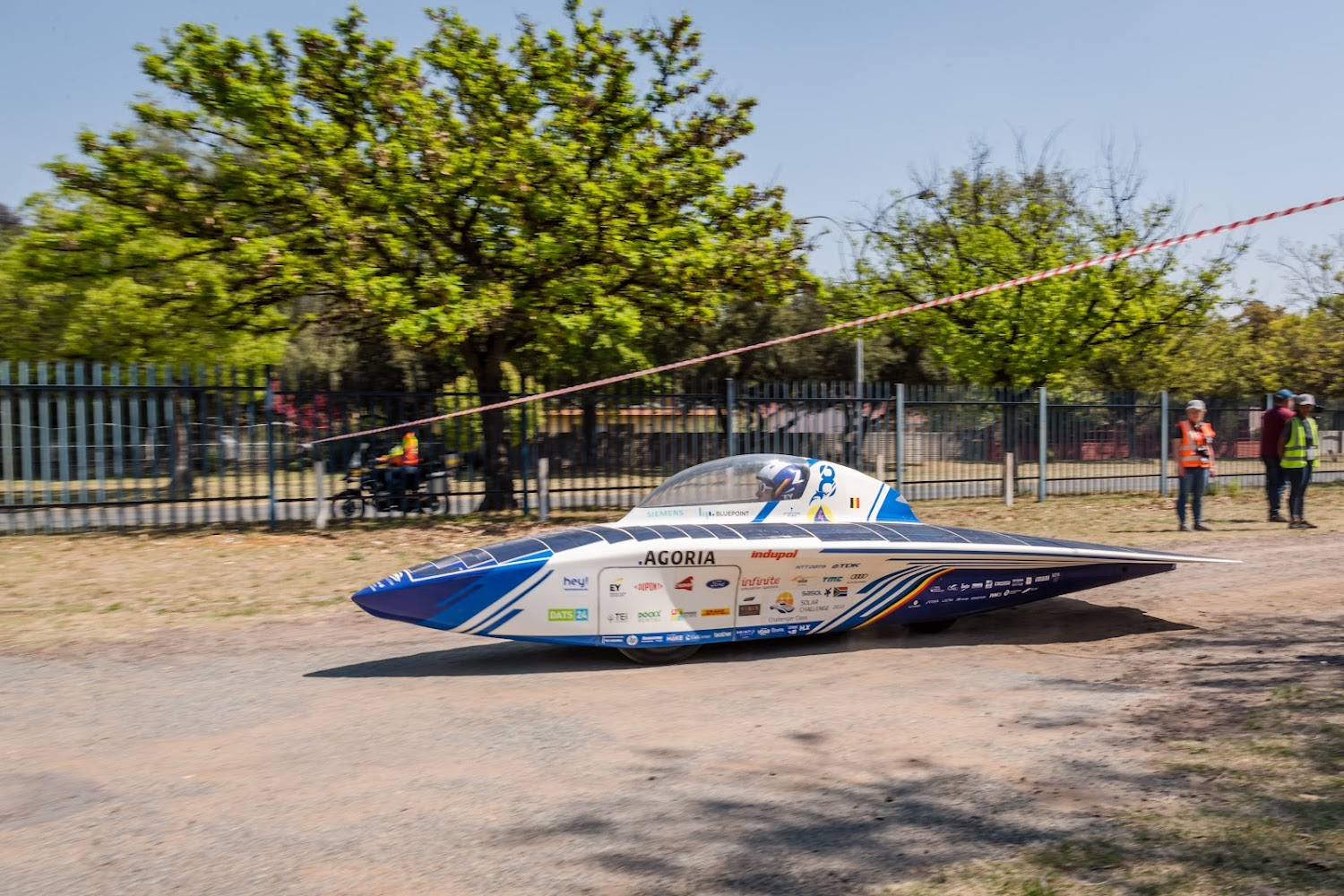 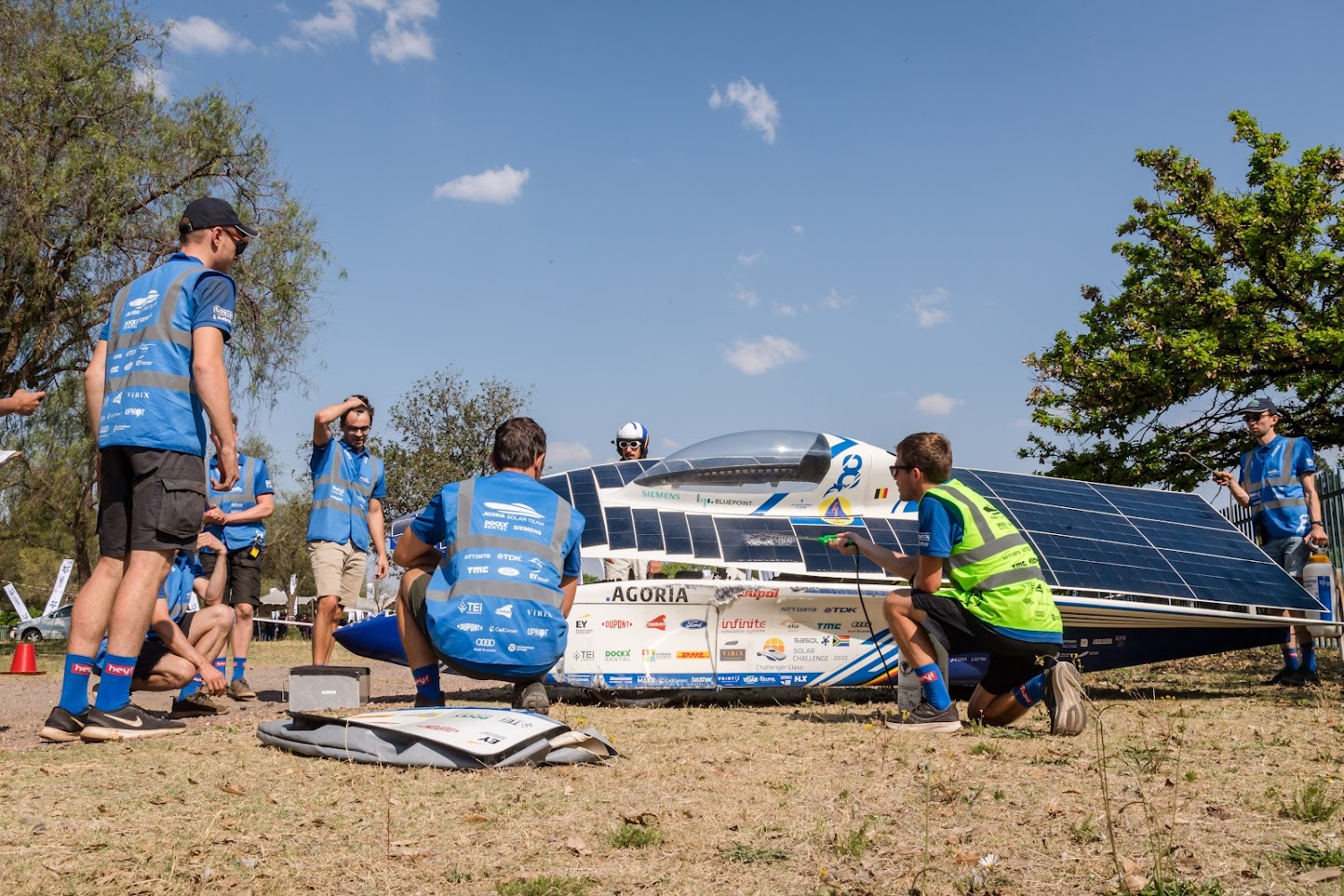 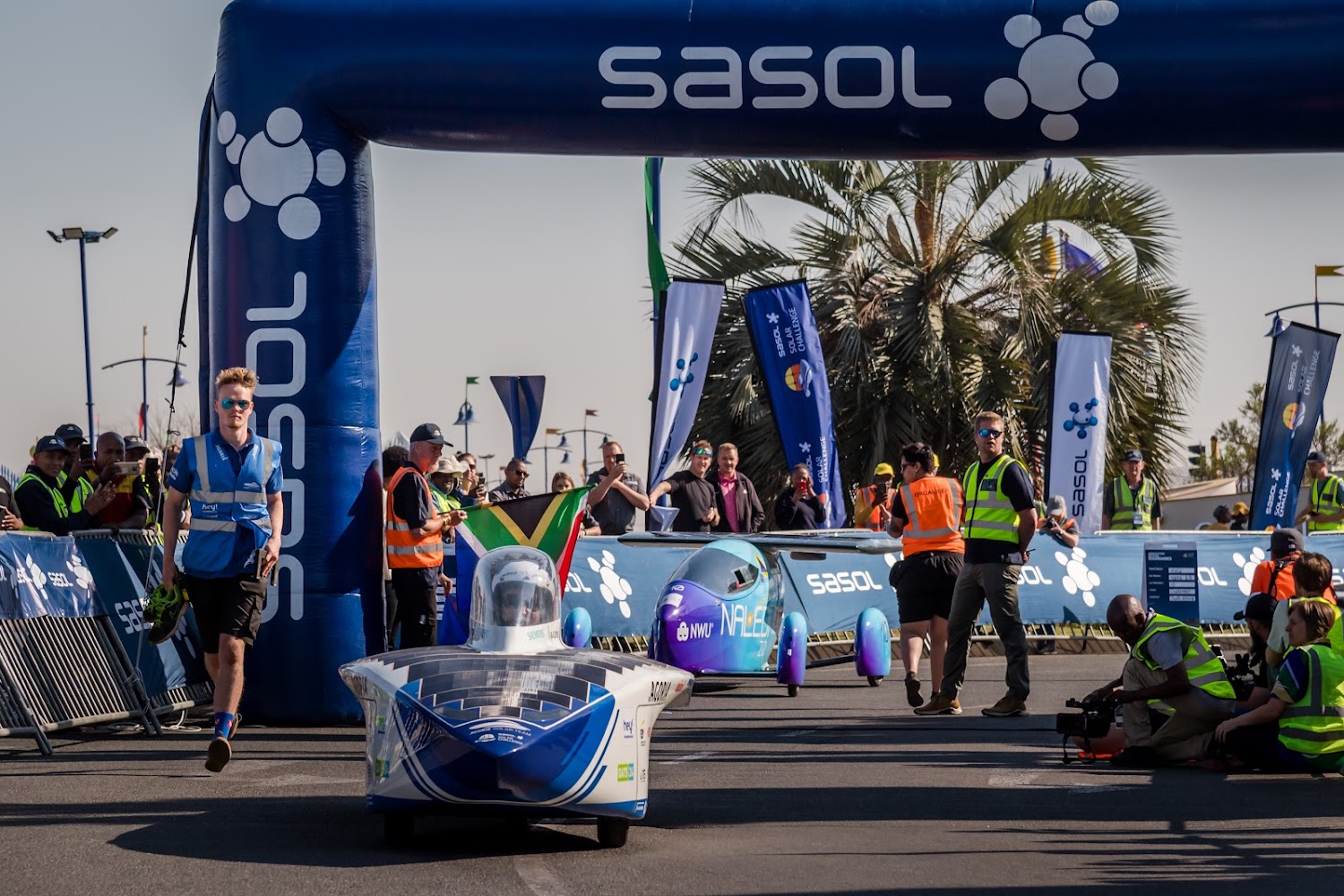 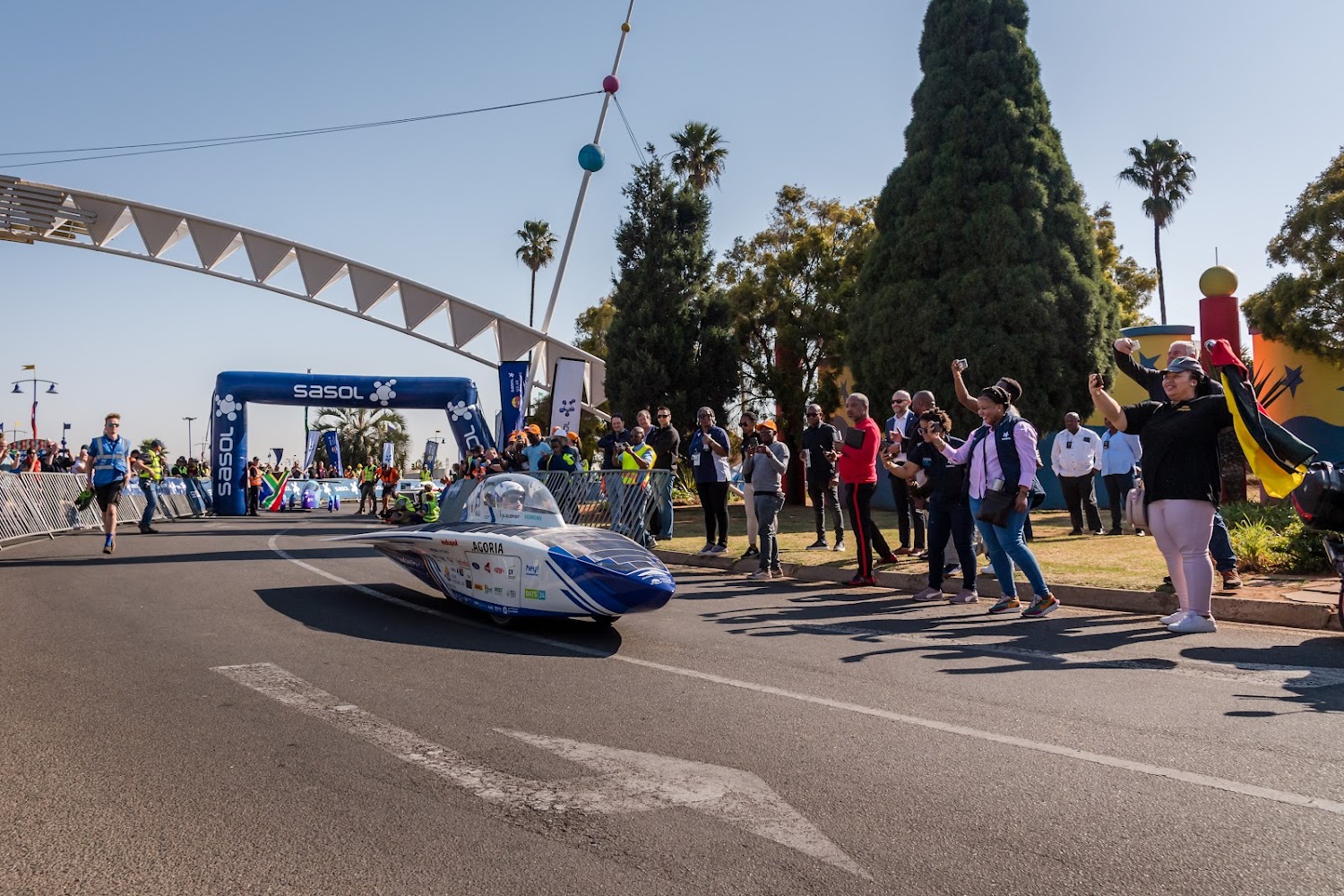