The Belgian Solar Team is third in the ranking of the world competition for solar cars in Australia. Today, the students of the University of Leuven overtook the team of the Japanese university of Tokai and the Dutch university of Twente. The team still has to drive 589 kilometers until Adelaide, tomorrow will be an exciting day. 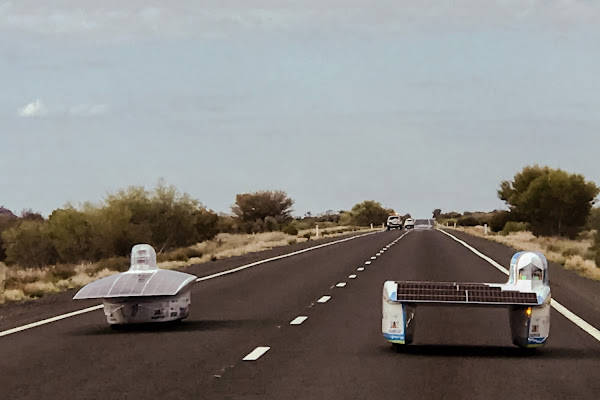 The Belgian students who were eight minutes behind the solar car in front of them, left their camping spot with a lot of confidence this morning. After only an hour they overtook the Japanese team of the university of Tokai. For a while both teams were driving right behind each other but the Belgian team was able to outdistance the solar car of the Japanese. Right before the end of the race day the Belgian team also overtook the Dutch car of the University of Twente. “We had to drive slowly the past few days because of the bad weather conditions. Because of that, we had more energy left in the battery, that is why we were able to drive a lot faster today”, says Pieter Galle.

Today the weather also played an important role. There was a heavy wind that put a lot of pressure on the solar car and its tires. Right after the first control stop in Coober Pedy, the pilot noticed that the car had a flat tire. “We practiced this situation a lot, so we immediately knew what we had to do”, says Laurens De Meyere. “We replaced the tire in only 5 minutes, the car was on the road again in no time.” 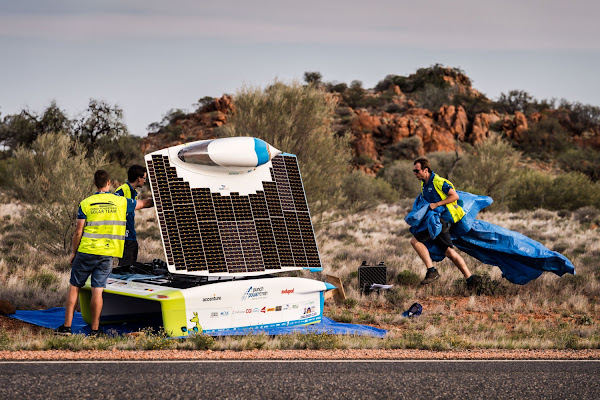 The Belgian solar car drove 653 kilometers today with an average speed of 77 kilometers per hour. At this moment, the students are camping in the small town of Glendambo. The car has already driven 2432 kilometers, the 3021 kilometer long race is almost coming to an end. “Tomorrow will be a very exciting day. We are not far away from the second place but the two cars behind us are very nearby. We will do everything in our power to take the second place”, says Pieter.
More items