Man versus Machine on the Memorial van Damme

The stadium goes silent. On your marks, set, … and with a gunshot they are off for an unique competition between man and machine. The brave Kenyan Nicholas Kiplangat Kipkoech starts his race against the Belgian solar car with a determined mind. His lead grows to a stunning 200 meter, in a race that is only 600 meters long. Will the solar car be able to catch up on him in front of 46.000 people?

The way to the Memorial.

The team was full of new ideas in their first month. Man versus machine was one of these was one of them. First of all we were trying to contact the organisation of the event through our contacts, but with no luck. Like the innovative students we are, we tried to look for new ways to contact Wilfried Meert. Sometimes you do not have to look that far, an email to the info mail address of the event was enough to get in touch. A few days later we were called to organise the race.

The tension builds up as we arrive on the Memorial 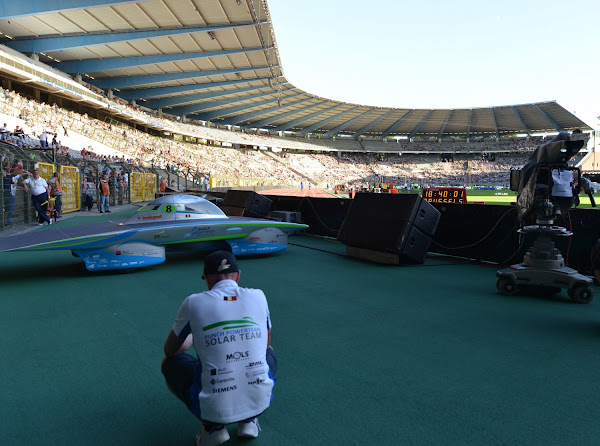 After arriving at the Memorial, we placed our solar car at the entrance of tribune one. By doing this, all the spectators could have a glance on our solar car. It received a lot of attention and it was clear that people looked forward to the challenge between man and machine. We moved the solar car to the track right before the Memorial started and from that point onwards, we waited for our moment of glory. The atmosphere was amazing and reached a maximum when Nafissatou Thiam made her entrance with her recently earned Olympic gold medal. For us, it functioned as a sign. We could go on the track to prepare the solar car. 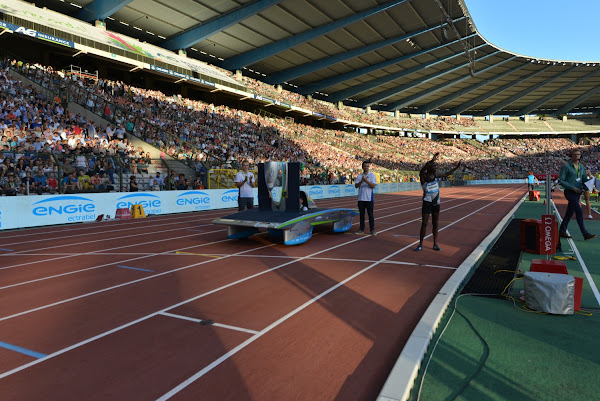 Kipkoech and the solar car stand side by side. The referee fires the start shot and Kipkoech takes by far the best start. About 15 seconds later, the solar car slowly gets up to speed. The crowd gets on their feet as they see the solar car speeding up. It’s going well. The solar car is gaining ground on Kipkoech. Only 100 meters left and Bert Longin finally has the athlete in his sight. The crowd goes wild. They cheer the Belgian solar car forward while it passes the athlete and finishes 3 seconds before the athlete.

Euphoria in the stadium

Shortly after the race, the entire Punch Powertrain Solar Team sits together to watch the rest of the Memorial. Proud of what they have achieved, their heads quickly go back to the Bridgestone World Solar Challenge in Australia in October 2017. They aim for gold in this officious world championship for solar cars.