The Bridgestone World Solar Challenge, the world championship for solar cars, will start on Sunday morning. The 3021 km journey passes through the Australian Outback, From Darwin from the north of Australia to Adelaide in the south. The Punch Powertrain Solar Team is very ambitious and eager to start with the race. “We aim at the top three, with the first place as main goal”, says Jasper Schrijvers of the Solar Team. “But all the circumstances must be good. There are some very strong competitors.” 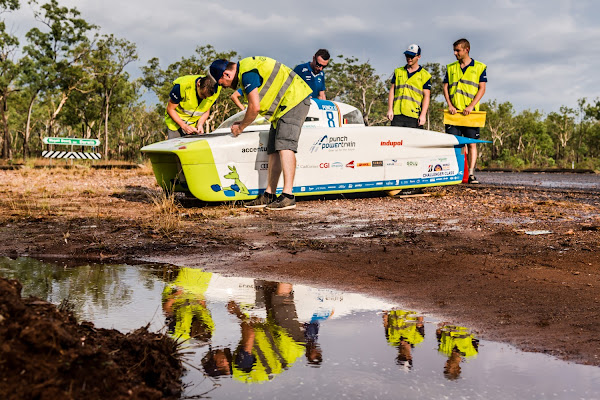 Secret weapon in the solar car

The 21 engineering students of the University of Leuven worked for a year and a half on their brand new solar car. The Punch 2 operates solely on solar power, its top speed is 120 km/h and weights 143 kilograms. That is very low compared to a normal car of 1500 kilograms. 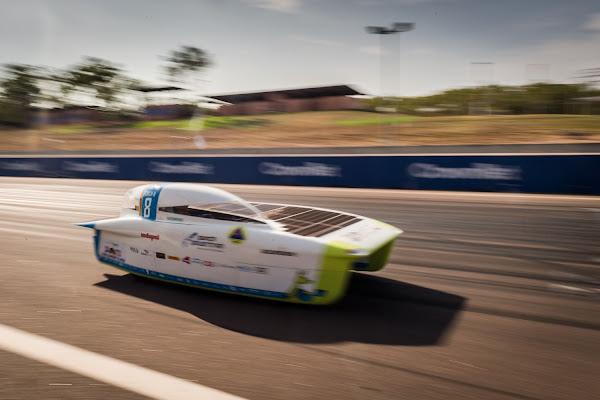 Now that they are in Australia, the team can also test their secret weapon. Inside the car there is a system that allows the rear wheels to be turned slightly so that the car can benefit from the side wind. “The car is put slanted on the road. Because we can take advantage of the wind, the car can drive a lot more efficiently. It’s kind of a sailing effect which reduces the resistance. That way we can drive a lot faster”, says team manager Joachim Verheyen. The students hope that it will help them to have an advantage over their opponents. We haven’t seen any other team doing this. We have been thinking about it for a long time, it’s an innovative system and we think it can make the difference.”

It’s the seventh time that a group of Belgian engineering students participate in the solar race. Ten years ago, the team was ranked second, the best performance of a Belgian team so far. During the previous edition, in 2015, the students achieved a nice fifth place. This year, the students want to do even better. Therefore they will not let anything happen by chance. They have been preparing for more than a month now in Australia to make sure they are ready for the race! Tomorrow, all the participants will compete on the race circuit in Darwin. Racing pilot, Bert Longin will drive the qualification lap for the Belgian team. The fastest team can start first on Sunday. This is the moment all the students have been looking forward to after so many months of hard work. “The past few months were very intense and it is surreal for us to be here right now. We are very eager to finally start with the race’, says Joachim Verheyen. “I am really looking forward to drive with the car”, says pilot Jasper. “It is an incredible feeling!”

The Belgian team expects to arrive in Adelaide after five days. The prize-giving ceremony will take place on Sunday the 15th of October. During the race the team can be followed on Facebook, Twitter and Instagram.