The qualifying round was driven with the Punch 2 by professional racing driver Bert Longin. 42 solar cars gathered at the start of the Hidden Valley circuit, with the Punch 2 last in line. All teams had only one chance to set the fastest time, which would decide their starting position in the race. The Japanese team Nitech set the bar high with a fast time of 2:04 min. 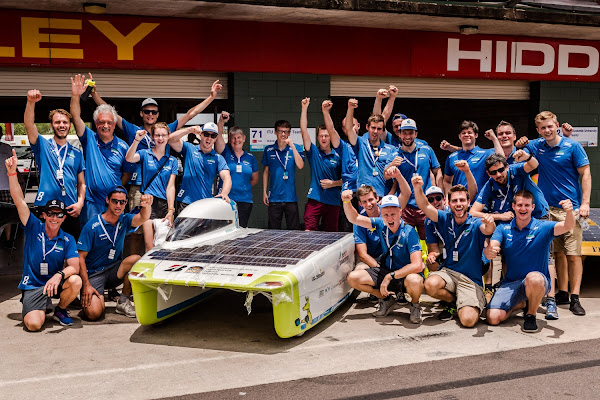 The first race day didn't go as well as the we had hoped. The Punch 2 had to let five solar cars pass after a dream start in pole position. However, the first hours of the race went well. For a while, the Punch 2 was able to set the pace and race neck to neck with the top teams. Until fate struck: the chase vehicle monitored an abnormally high power consumption and called a stop for a technical check. It became clear that something was dragging against the rear wheel, a setback that was resolved after 15 minutes. At 5 o'clock, all cars stopped driving and Punch 2 was in sixth position. This first day was a disappointment, but we didn't lose motivation: the race had only just started and the Punch 2 was ready to overtake. 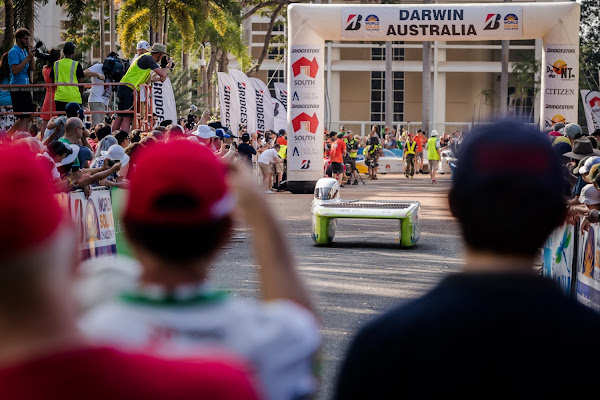 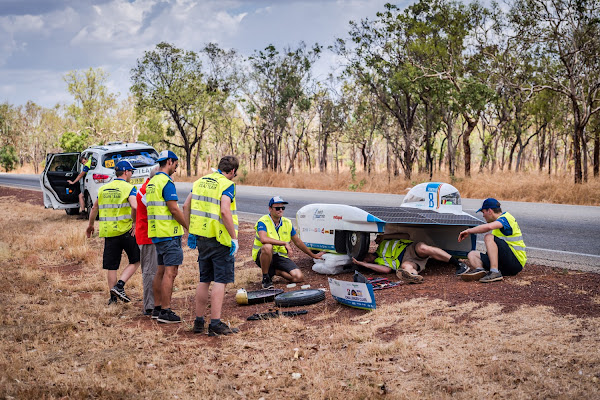 Day two started under a bright, shining sun, but in the afternoon heavy clouds started to show up. This had a big influence on the further course of the race day, because all teams were forced to lower their speed. Luckily, we were prepared for this: a Belgian weatherman was part of the convoy. His weather predictions were closely followed and the speed of the solar car was adjusted accordingly. Punch 2 drove at an average speed of 76 kilometres per hour, slightly faster than the Western Sydney Solar Team. In the late afternoon, the Punch 2 performed an overtaking manoeuvre on Western Sydney just before the end of the race day. We were now in fifth place. 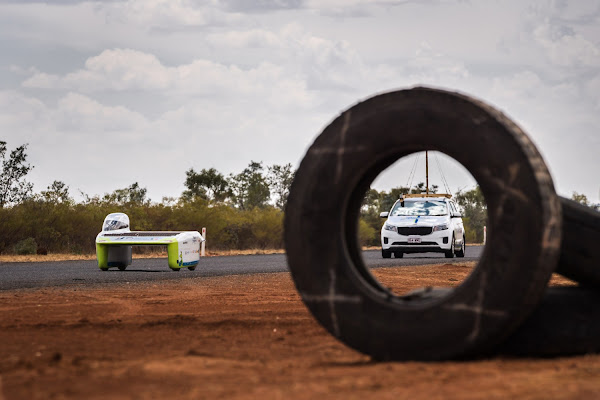 On day three, the weather deteriorated. All teams drove even slower and only just reached a speed of 70 kilometres per hour, which made the race strategy even more important. The slowest cars even threatened to come to a complete standstill because the clouds in the back of the race were even denser. In the afternoon, Punch 2 was able to drive faster than the teams in front, as we had anticipated worse weather and had therefore driven more sparingly the day before. Punch 2 was approaching fourth place, which was in the hands of the Japanese Tokai Solar Car Team who were eight minutes ahead. After setting up the camp, some team members went to take a look at the Japanese camp, which was only three kilometers away. They were clearly expecting an early overtaking manoeuvre the next day. Day four promised to be nerve-racking. We woke up after a drenched night. A storm had pulled over the desert and some tents had collapsed or were flooded. Moreover, the truck had gotten stuck in the mud. We were wide awake after the truck was liberated from the mud pool with all its might. There wasn't much time to think about it: the Japanese team Tokai spent the night only three kilometres away, no doubt in the same storm. Luckily, the Punch 2 hadn't been damaged by the storm and could easily be started at eight o'clock in the morning. Tokai was easily overtaken. The Japanese team decided to do one more overtaking maneuver before the Punch 2 left them behind for good. Punch 2 now rode in fourth position and approached Twente and Michigan. At that moment, Delft was riding in first place, an hour and a half ahead of Michigan. In the afternoon there was a very strong crosswind, which made it difficult for the solar cars. Heavy gusts of wind had a greater impact on solar cars due to the low weight. Fortunately, the pilot was able to keep control of the car at all times.

When Twente was almost in sight, the chase vehicle suddenly noticed a flat tire on the solar car. Fortunately, this was replaced in a matter of minutes, so we were soon able to continue their hunt for Twente. Around 4 o'clock, the third place was within reach. We caught up to Twente and set up camp as third in the race at the end of the penultimate day. 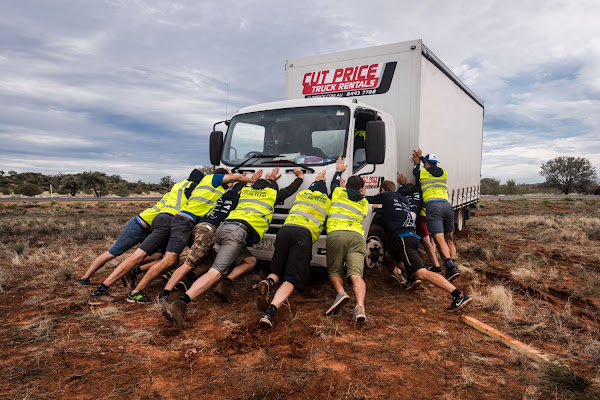 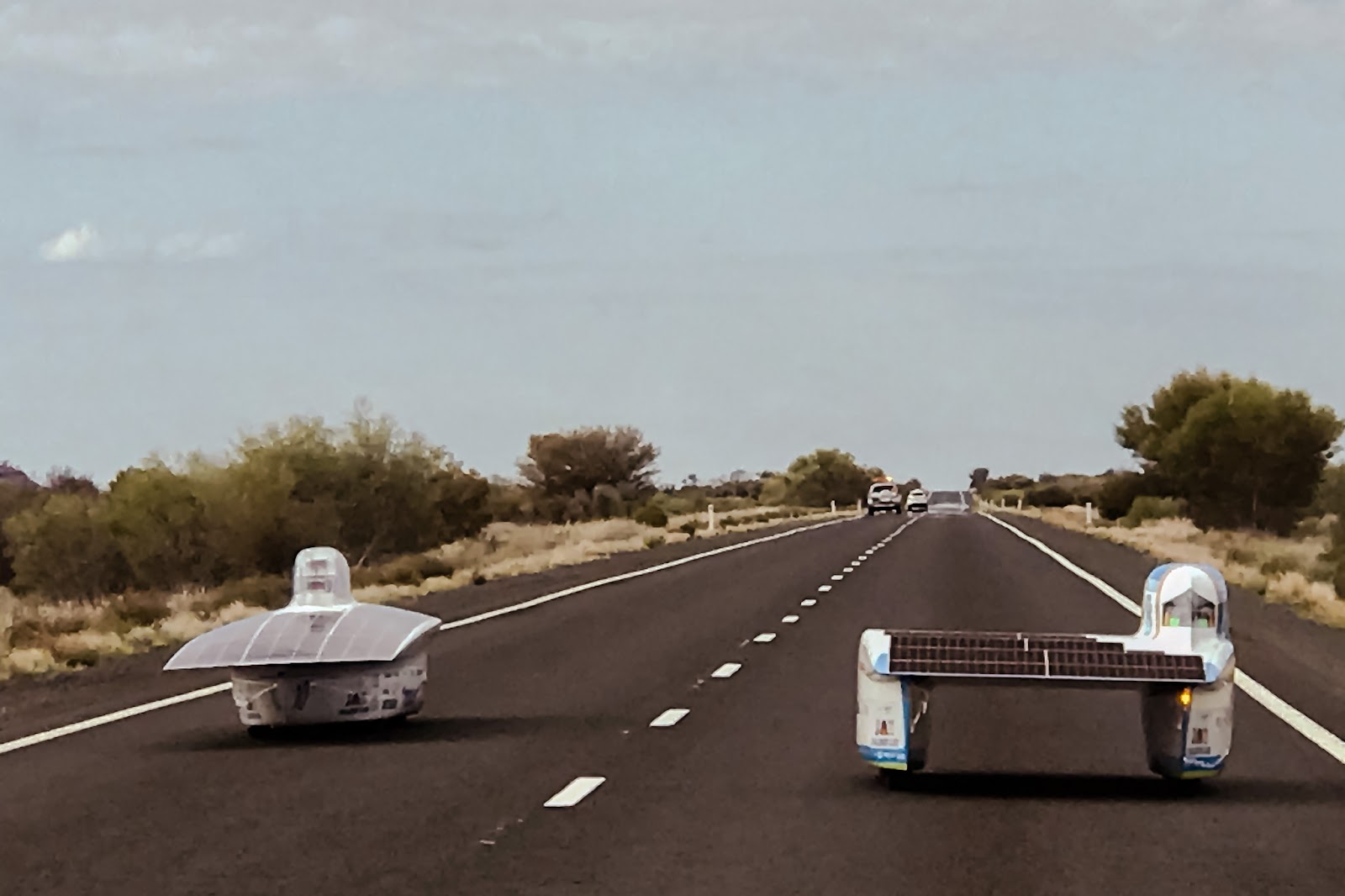 Day five: the last day. Both Twente and Tokai were on the heels of the Punch 2, but Twente quickly dropped out due to a penalty time of half an hour. Tokai stayed awfully close behind the Punch 2, but couldn't catch up. In the heat of the battle, there wasn't even time to refuel, so the Brains - the chase vehicle right behind the solar car - almost came to a standstill before the finish. Fortunately, the Brains made it and we could count on the friendly Japanese to refuel the indispensable chase vehicle. Michigan finished second at twenty minutes before the Punch 2. Delft won the race with a stunning two hour lead on the next team. The Punch 2 was the third car to cross the finish line. As tradition dictates, we were able to cool down in the fountain at the finish line: we were thrilled to win the bronze medal. 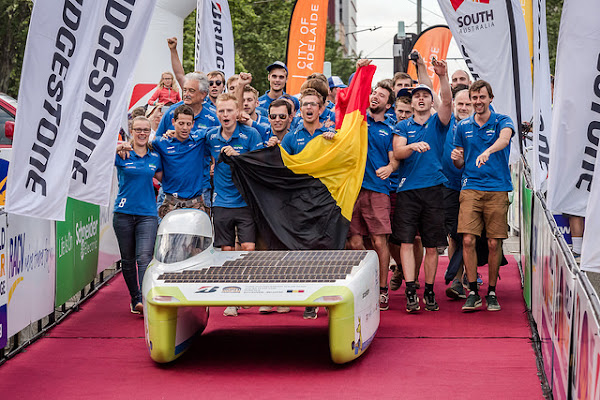 Besides the World Cup, there are also other prizes to be won during the closing ceremony of the World Solar Challenge. Our slogan "Inspiring Innovation" revealed that from the beginning of the design period we had set ourselves the goal of building an innovative car. Our mechanical geneva-steering system, supplemented by a mechanical-electronic system to "sail" the car on the road, convinced the jury. In addition to a third place, we also won the Innovation Award. 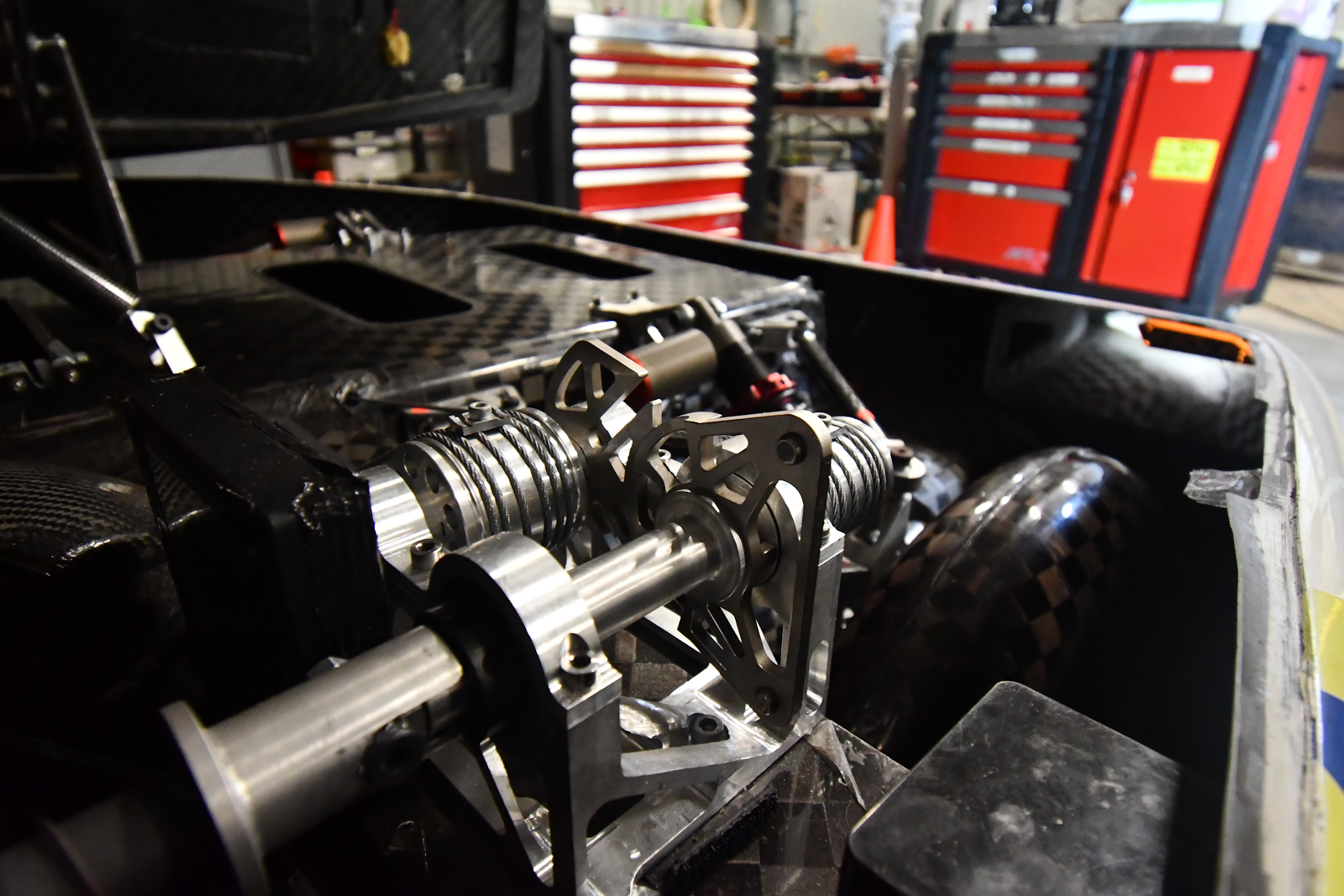 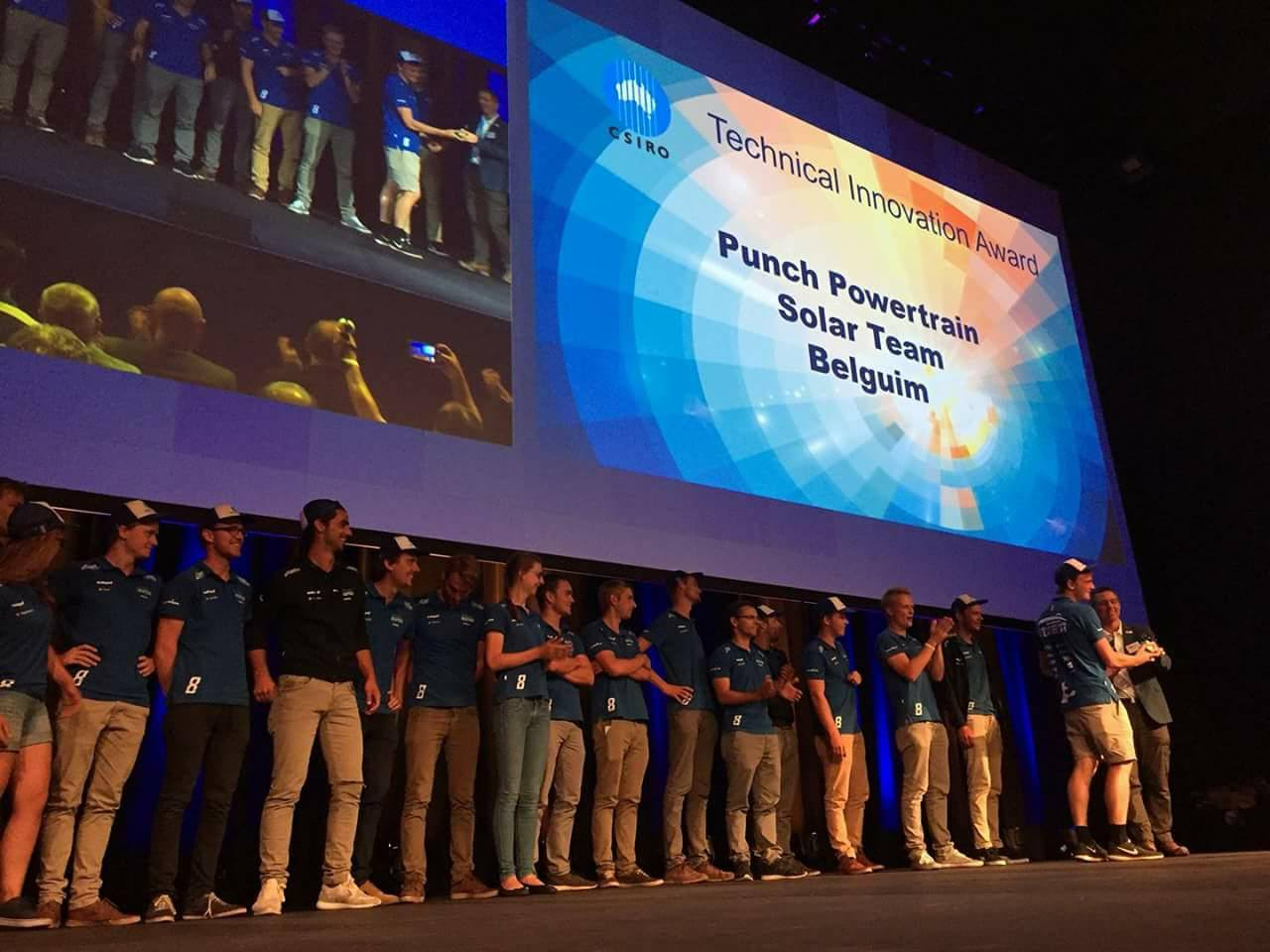