In October of 2018, we participated in the Carrera Solar Atacama, also referred to as the most extreme race for solar cars. We took part with the Punch 2, the solar car which had finished third in the Bridgestone World Solar Challenge the year before.

The race lasted five and a half days and took us along beautiful sceneries, ranging from steep ocean cliffs to landscapes reminiscent of the surface of the moon. The trajectory itself was challenging, facing strong winds, extreme levels of solar irradiance (higher than in Australia) and steep climbs, with one race day featuring a climb from 0 to 3000 meters above sea level. To prepare for the extreme conditions, the Punch 2 had a new motor and braking system implemented, fit for the steep climbs and challenging route.

In the end, we finished first in the race, landing us the very first gold medal in the history of our Belgian Solar Team. We also received the Spirit of the Event-award.

As with most solar car races, the qualifying lap dictates your starting position in the race. The car first has to pass a series of technical tests, verifying whether the safety of the pilot and other drivers can be guaranteed on the open roads. We were first to pass all technical checks, and so we were allowed to start the qualifying lap at the Autodromo Las Vizcachas in Santiago. 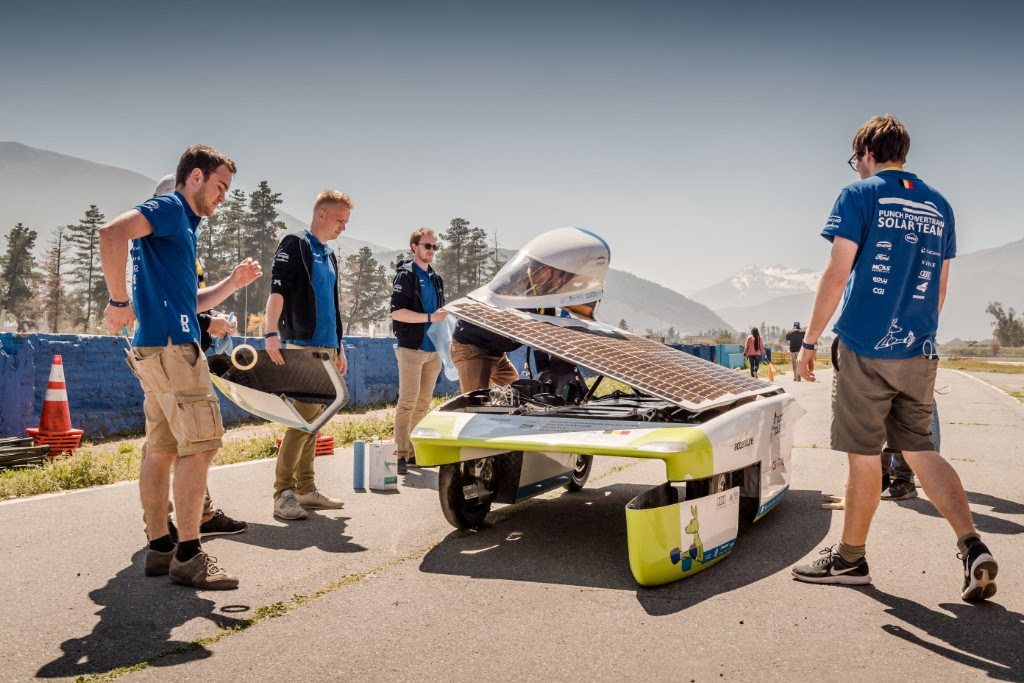 In the last straight line of the warm-up lap, the Punch 2 started to get to speed for the fast lap. Our pilot noticed he was approaching the first turn too fast and tried to correct it by braking. However, the newly installed, stronger brakes caused the solar car to start slipping on the rough asphalt. The Punch 2 slipped off the track and ended in the grass next to the circuit. 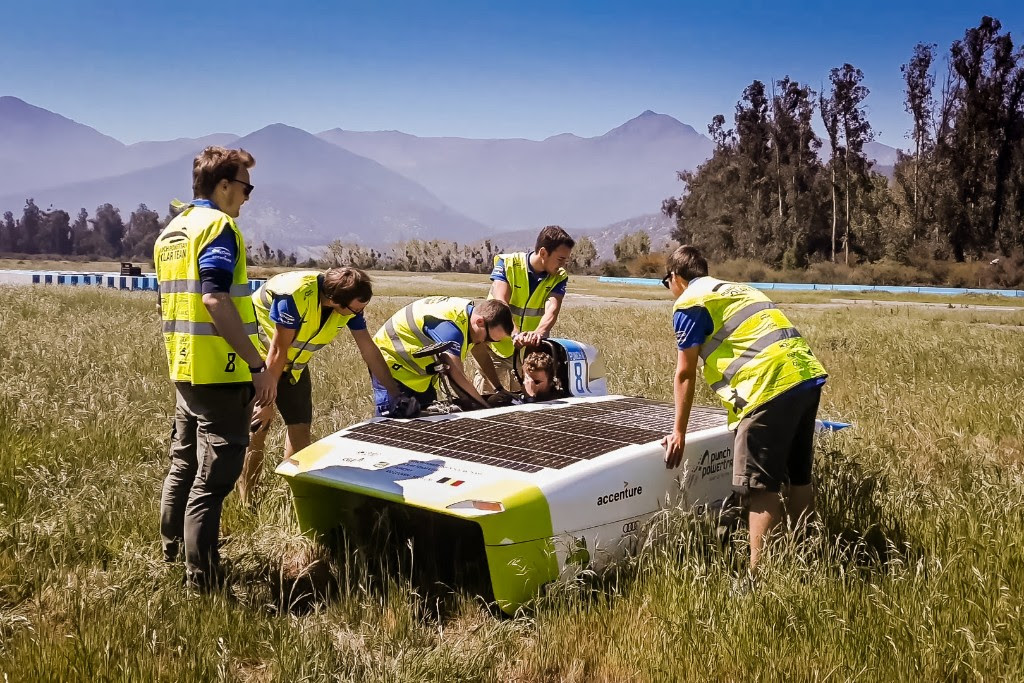 Luckily, our pilot was unharmed. After electronic and mechanical checks, the car proved to be unharmed, except for minor damage. The Punch 2 was repaired and would start the race from the last place.

The race started on Sunday in the middle of Santiago, the capital of Chile. The pilots later said they found it quite daunting to start a race in rush hour traffic in such a busy city, but luckily they were guided by Chilean policía to ensure safe passage. 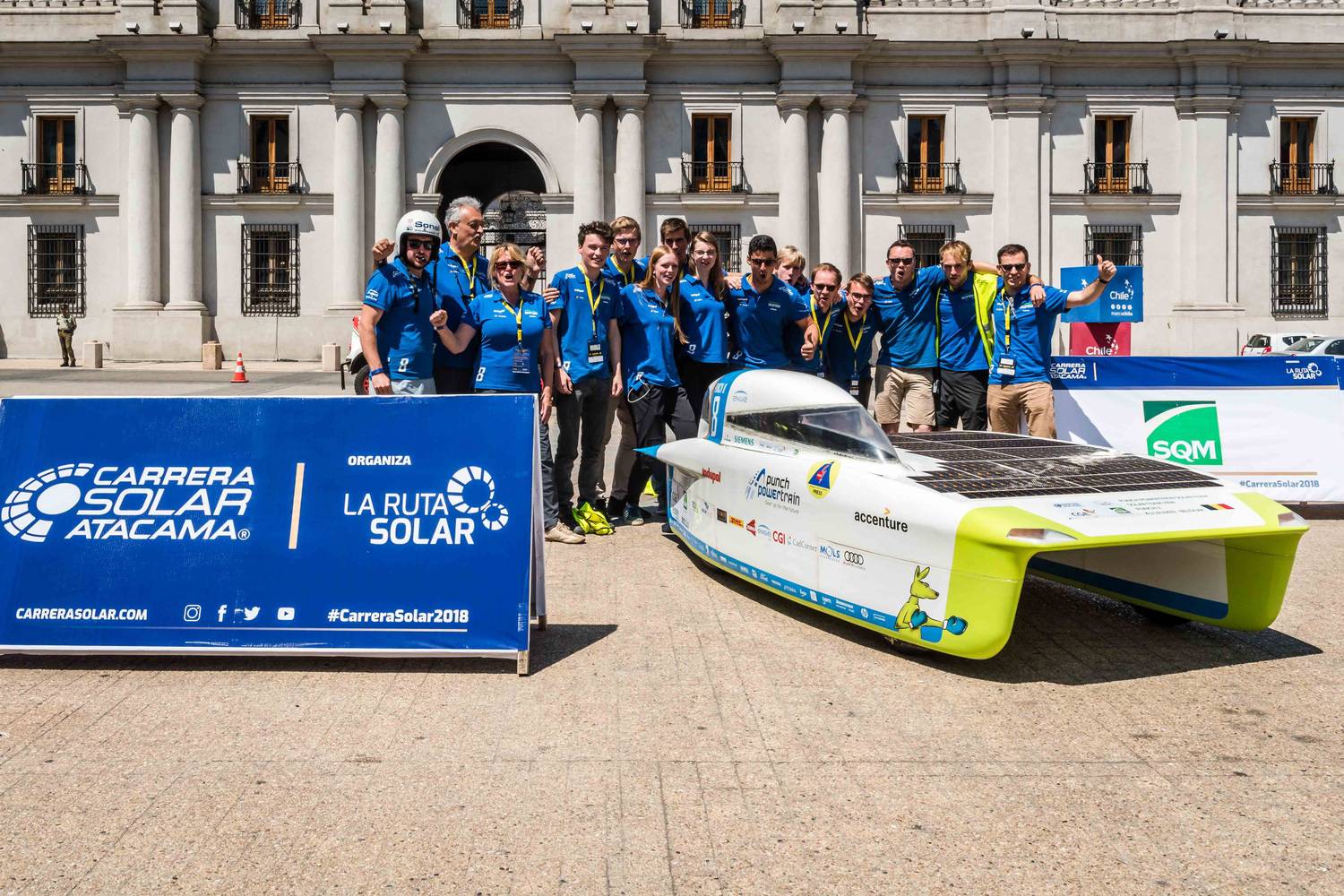 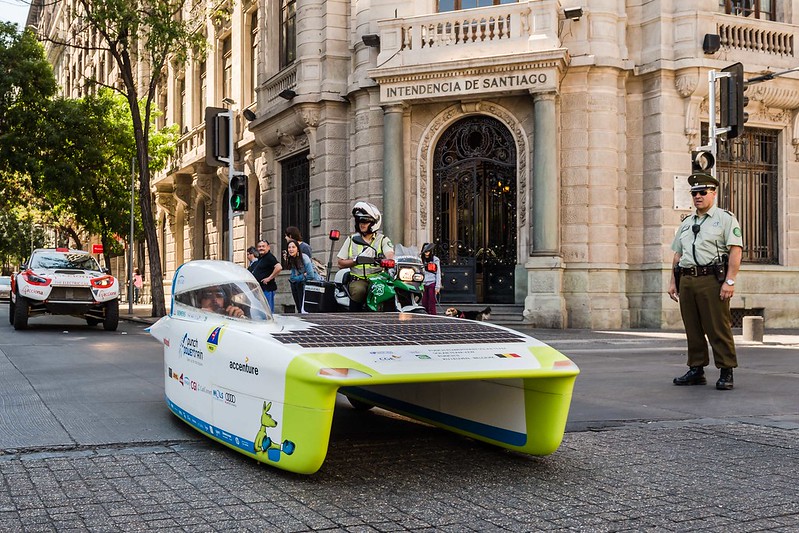 Making up for last place, the Punch 2 drove about 328 kilometers during the first race day. This brought us from Santiago all the way to Mantos De Hornillos at the coast, passing other teams along the road. We ended the race day in first place and set up camp next to a wind turbine field. 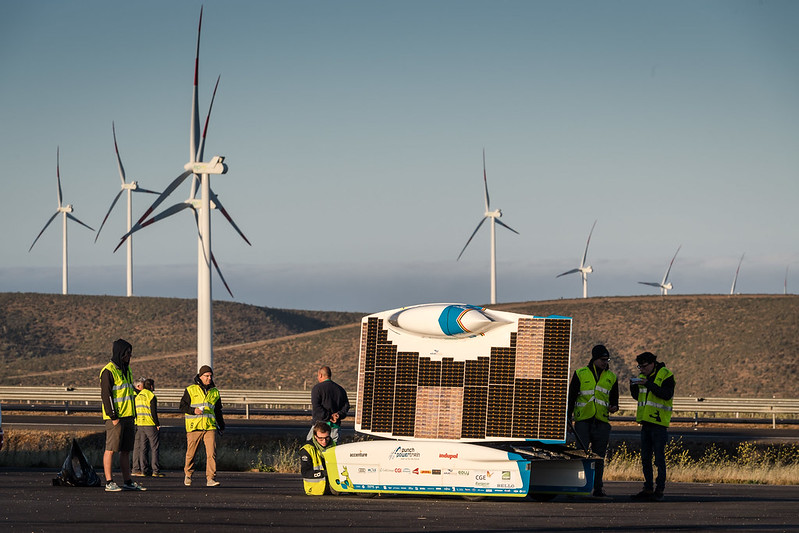 After climbing to first place on day one, the second race day posed the next challenge for the Punch 2: climbing over 1000 meters above sea level for the very first time. We passed by scenic roads along the coastline to harsh turns up high in the mountains. 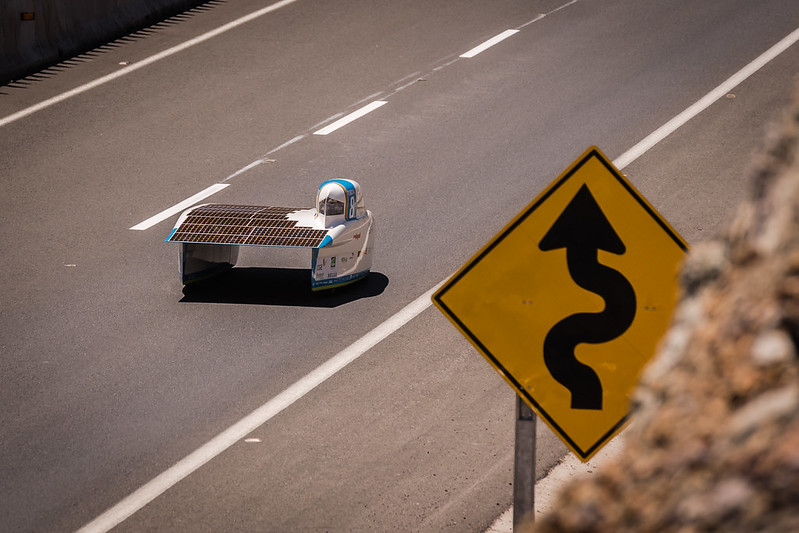 Chile has a system of toll booths to pay for the usage of their highways, which meant the Punch 2 had to pay for the roads - just like any other vehicle! However, to avoid losing precious race time, we sent a scout up ahead to pay for the car convoy before they arrived, allowing swift passage of the solar car. 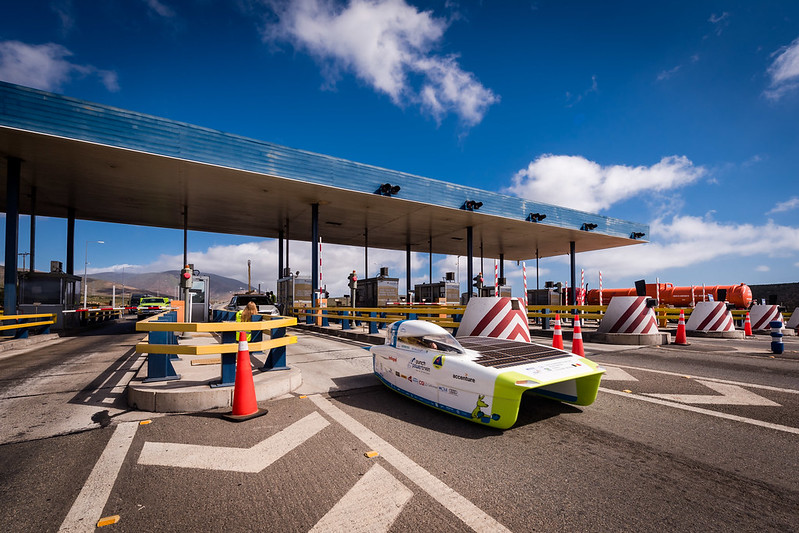 At the end of the day, we settled at a nearby camping club, the Club de Campo Alto Copiapo, which offered toilets and a comfortable spot to set up the tents.

Race day 3 started off gloomy, and heavy clouds barred us from a morning charge for the solar car. This resulted in us having to drive the first half of the day at a low speed of about 50 kilometers per hour. 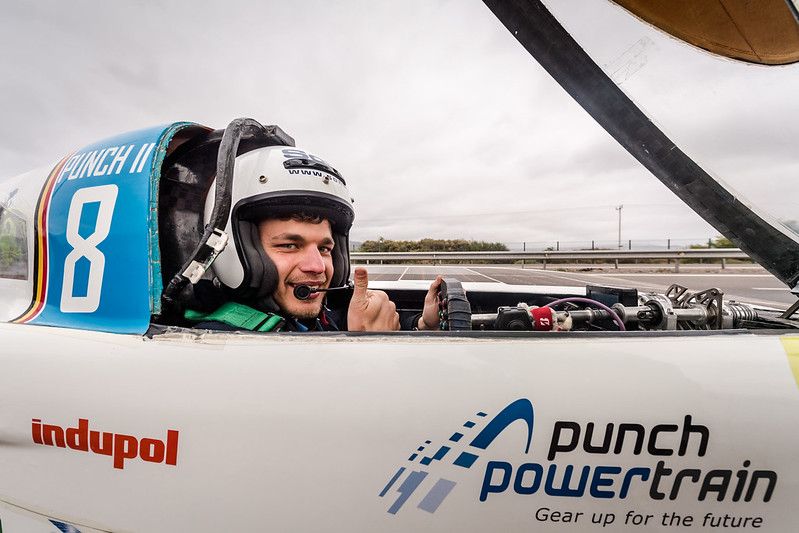 As the day went on, the clouds cleared and the sun peaked through, allowing us to pick up speed. This day, we also broke two personal records for our solar cars: highest recorded solar irradiance and highest altitude above sea level - which would both be breached later on in the race. 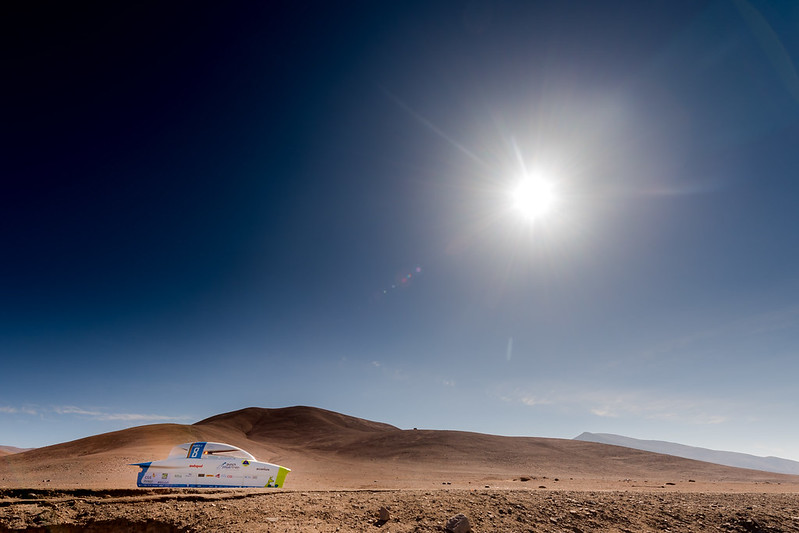 Day four was the big day: the day where the Punch 2 would pass over the highest point of the race, climbing from 0 to 3430 meters above sea level in a couple hours. This is a strong feat for a solar car, designed to climb no more than hundred meters during the race in Australia. It also poses a large strategic challenge: the car needs to have enough energy to climb and should have a depleted battery by the time it reaches the top. This way, the car can recharge the battery on the descent by braking on the motor, also referred to as regenerative braking, which sends energy back from the motor to the battery pack. 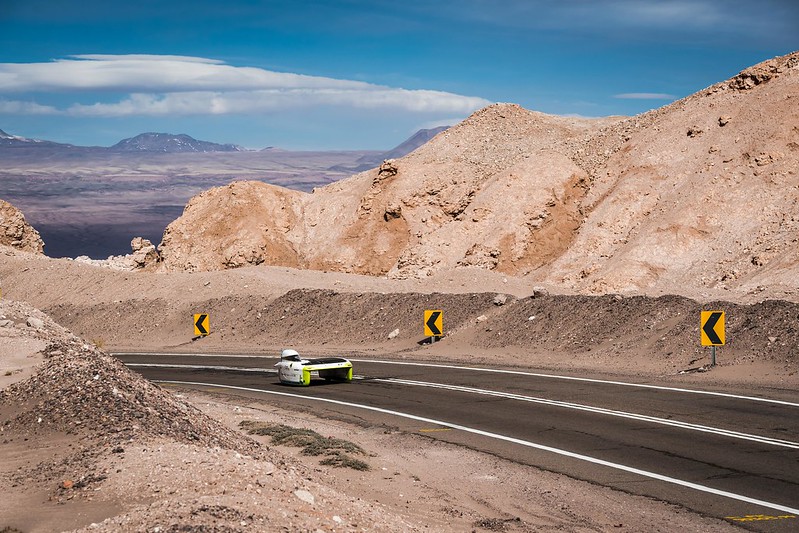 This race day also took us past one of the most breathtaking sceneries of the race: the Valle de la Luna, near San Pedro de Atacama. This valley, bordered by several volcanoes, features stone and sand formations with an impressive range of colors and textures - often compared to the surface of the moon. A prototype for a mars rover was tested here, due to the valley's dry and forbidding terrains. 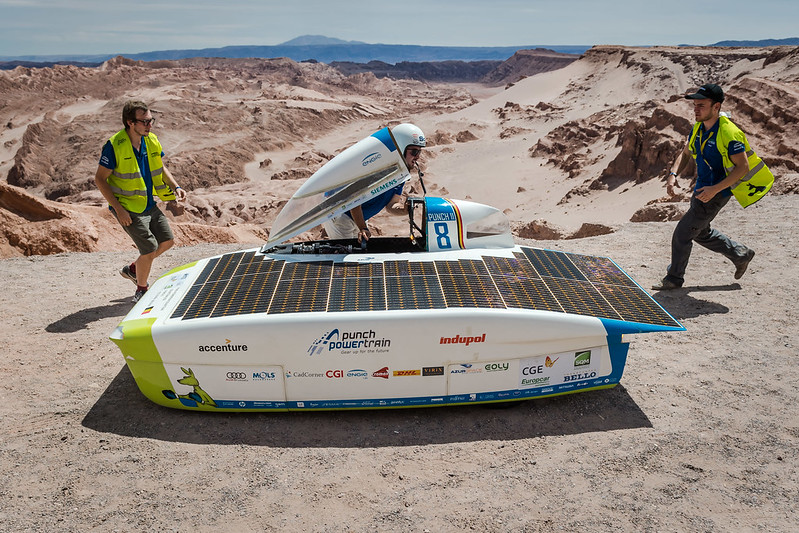 At the end of the race day, we set up camp in a nearby valley, almost equally as breathtaking as the Valle de la Luna. However, before being able to fall asleep underneath the clear, starry sky, we had another challenge to solve. In true Belgian Solar Team-fashion, our truck got stuck in the soft desert sand and had to be pulled out. The valley did not offer any protection wind while digging out the truck, and most team members ended up being covered by a thick layer of brown dust. In the end, the truck was freed from the sand, thanks to assistance from a friendly Chilean who passed by with his truck.

We later came to know the valley we stayed at is called Llano de la Paciencia, valley of patience. 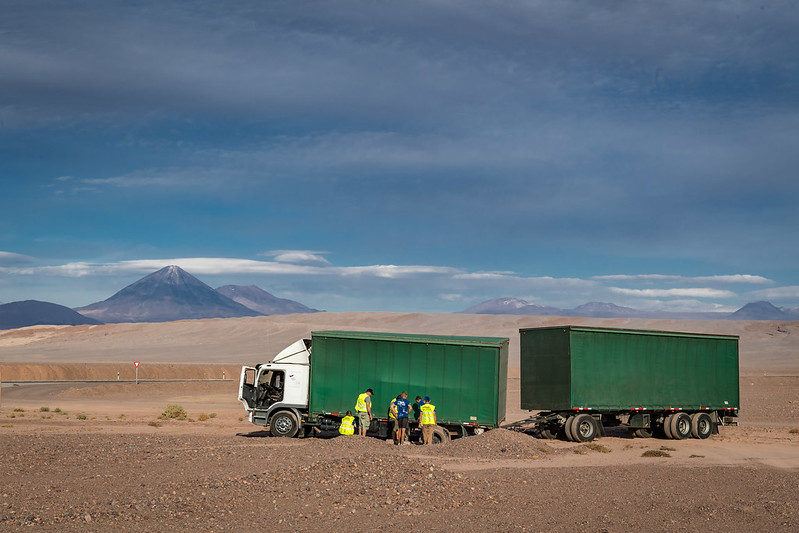 After some adventurous team members chose to sleep under the starry sky without a tent, we were all awoken by a beautiful - but chilly - sunrise. We packed up camp and descended back to the coast, where we were met by clouds. 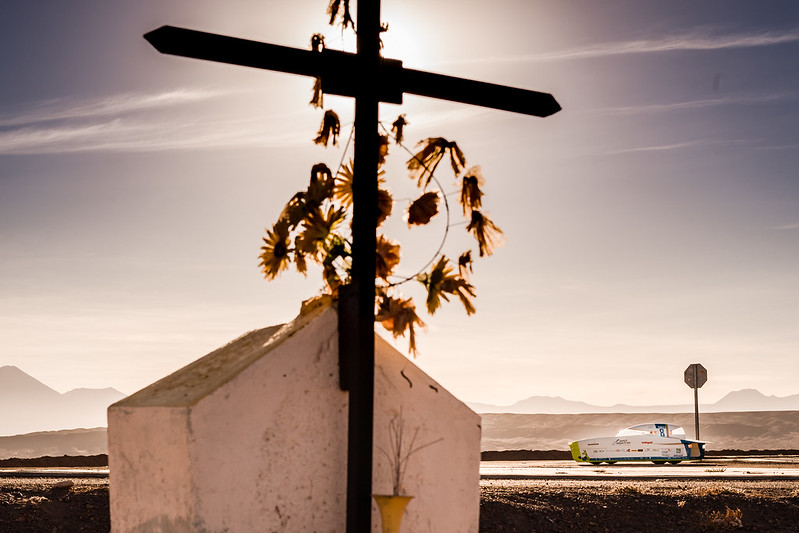 While we were well-prepared for toll booths, we were suddenly surprised by the aduana or customs: they wanted to see official paperwork for all the cars in our car convoy - including the solar car. We left the paperwork with one car in the convoy, who discussed everything with the police. The Punch 2 was only stopped for two minutes and was soon able to continue the journey along the coast. 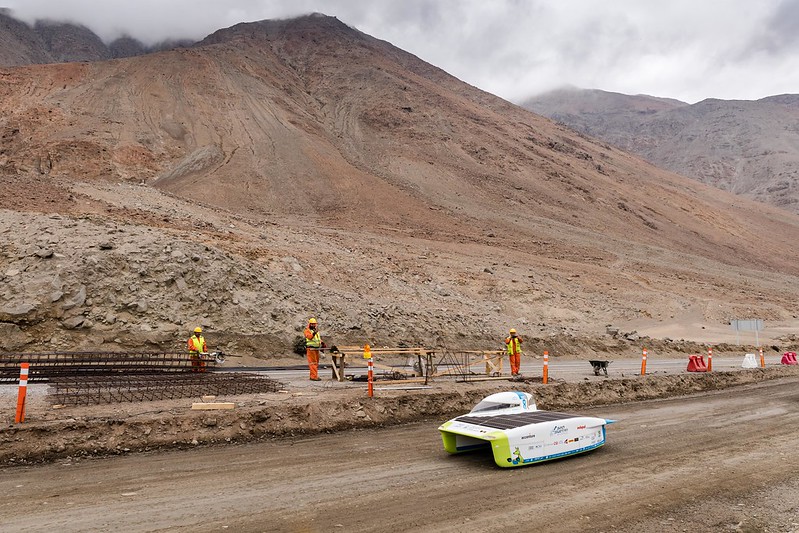 The very last race day included a sprint to the city of Arica. At 12:23 Chilean time, we were the first team to cross the finish line, which resulted in us winning our very first gold medal ever in solar car racing! We were not only proud of our first place, but also of the entire journey: we traveled the most extreme race for solar cars without any major problems. We also received the Spirit of the Event-award from the race organisation.

As is the tradition in Australia, we found the nearest fountain by the finish line to jump into. We celebrated with champagne and fresh Stella Artois beer! 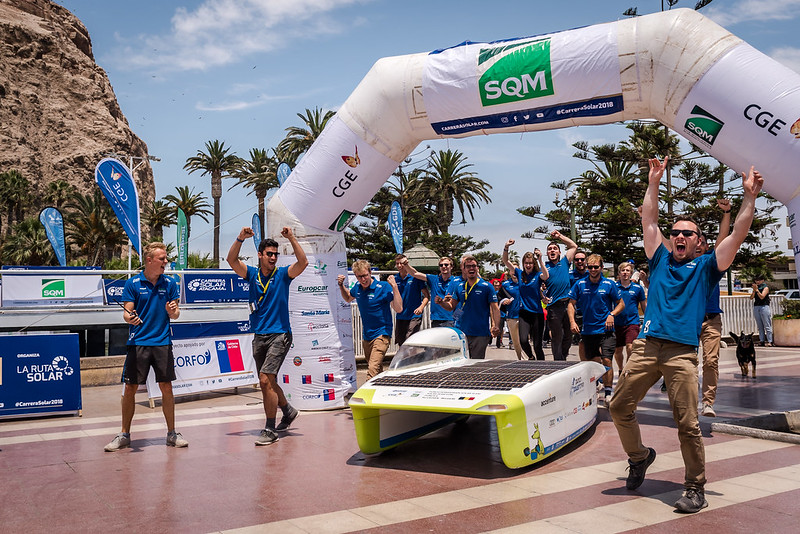 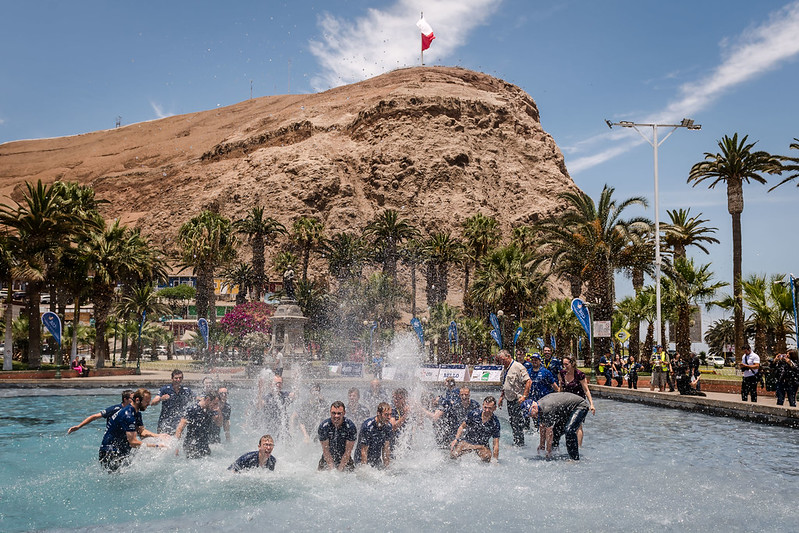 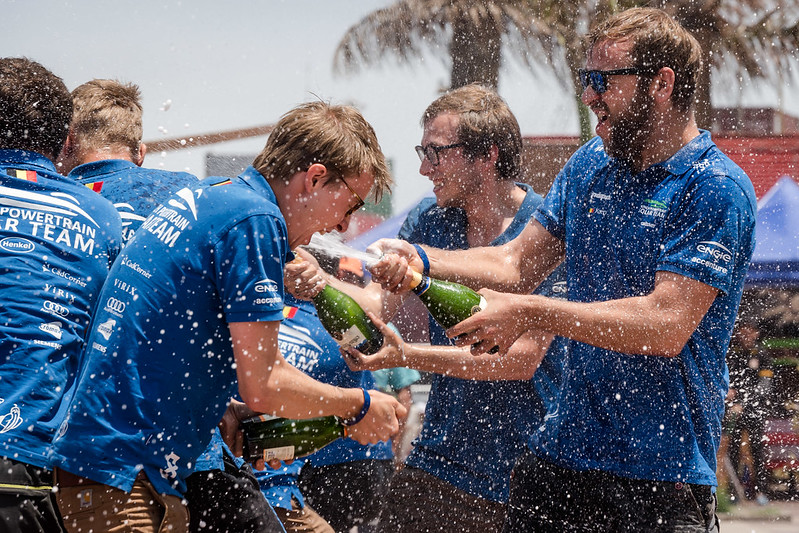